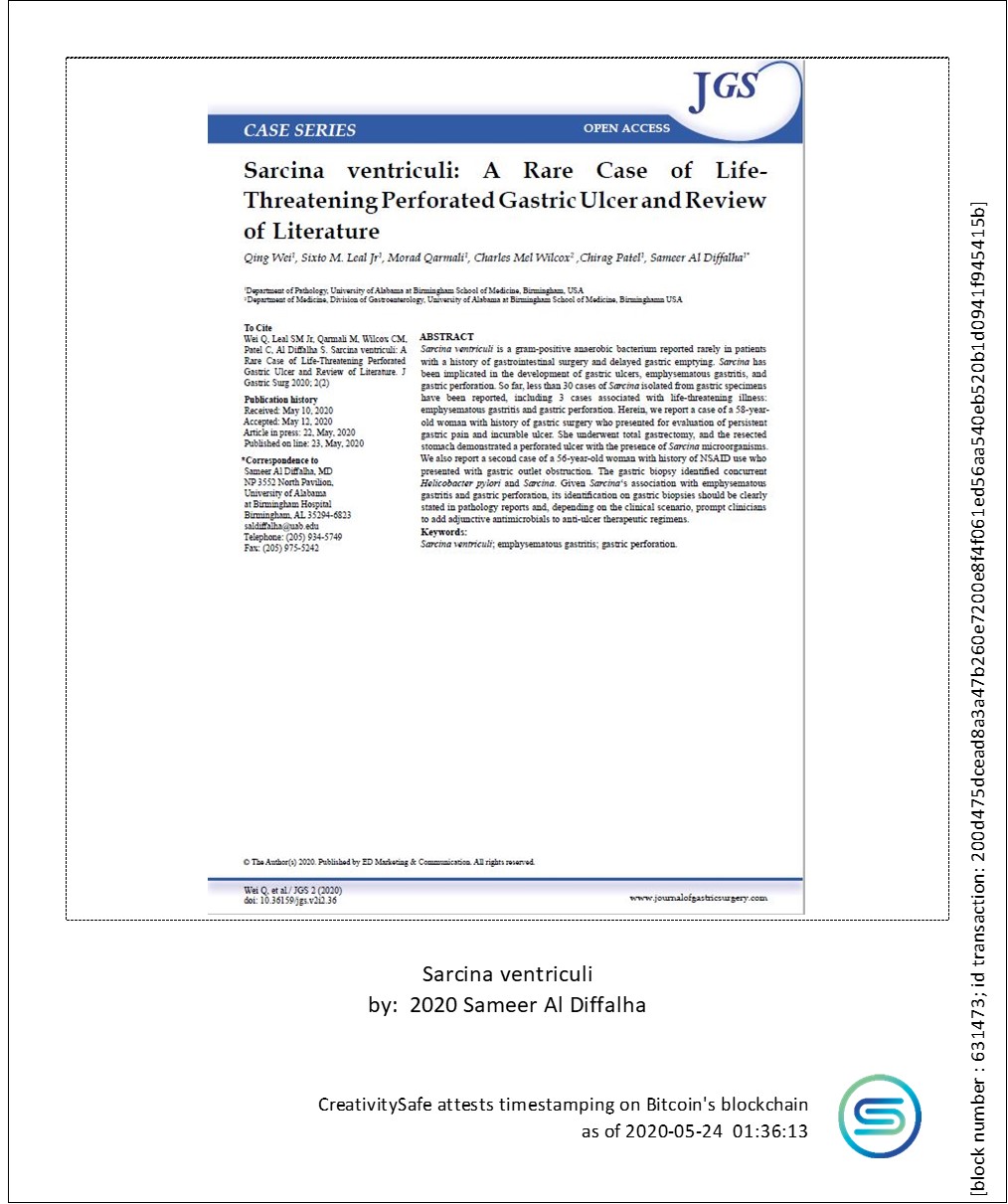 Sarcina ventriculi is a gram-positive anaerobic bacterium reported rarely in patients with a history of gastrointestinal surgery and delayed gastric emptying. Sarcina has been implicated in the development of gastric ulcers, emphysematous gastritis, and gastric perforation. So far, less than 30 cases of Sarcina isolated from gastric specimens have been reported, including 3 cases associated with life-threatening illness:
emphysematous gastritis and gastric perforation. Herein, we report a case of a 58-yearold woman with history of gastric surgery who presented for evaluation of persistent gastric pain and incurable ulcer. She underwent total gastrectomy, and the resected stomach demonstrated a perforated ulcer with the presence of Sarcina microorganisms.
We also report a second case of a 56-year-old woman with history of NSAID use who presented with gastric outlet obstruction. The gastric biopsy identified concurrent Helicobacter pylori and Sarcina. Given Sarcina's association with emphysematous gastritis and gastric perforation, its identification on gastric biopsies should be clearly stated in pathology reports and, depending on the clinical scenario, prompt clinicians to add adjunctive antimicrobials to anti-ulcer therapeutic regimens.

Sarcina was first identified as a human pathogen by Goodsir in 1843.[4, 5] It is a well-described pathogen in veterinary medicine and can cause a lethal gastric bloating-like syndrome.[6] Recently it has become increasingly implicated in human gastrointestinal disease and has been described to be associated in patients with history of GI surgery and delayed gastric emptying.[1, 3] Most patients exhibit GI symptoms, with some cases of severe disease, including emphysematous gastritis and gastric perforation.[7-9] Endoscopic findings often involve retained food residue, gastric ulcers, and inflammation or erosions.[1] Herein, we present two unique cases. One of them is the third reported case of Sarcina associated with gastric perforation. The other presented case is the second reported case that shows rare concurrent infections of Sarcina and Helicobacter pylori.

A 58-year-old Caucasian woman presented to the surgical oncology clinic for evaluation of a gastric ulcer and possible total gastrectomy. She reported epigastric pain, loss of appetite, nausea, and malnutrition. She had an open gastric bypass about 20 years prior that was taken down due to development of an internal hernia. Afterwards, the patient suffered dysphagia, gastric reflux, and chronic upper GI ulcers despite antacid and H. pylori treatment. Leading up to the evaluation, esophagogastroduodenoscopy (EGD) revealed an ulcer of the posterior stomach wall distal to the esophagogastric anastomosis, and ulcer biopsies showed benign fragments of gastric mucosa demonstrating marked active gastritis with focal ulceration.

The patient underwent total gastrectomy, ventral hernia repair, and associated procedures. Pathologic examination of the resected stomach showed a 2.7 cm x 2.5 cm ulcer of the proximal lesser curvature with a 1-cm thickness perforation through the serosa (Figure 1a). H & E staining showed multiple foci of Sarcina ventriculi tetrads (Figure 1b). Sarcina was also identified within the gastric lumen occasionally admixed with vegetable matter, consistent with delayed gastric emptying. Organisms were identified by the granulation tissue in the ulcer base as well as on the serosal surface, which was consistent with perforation and the presence of organisms within the peritoneal cavity.

The patient’s post-operative course was complicated by an anastomotic leak and polymicrobial intra-abdominal infection that required surgical revision, antibiotics (metronidazole, vancomycin, cefepime and piperacillin- tazobactam), and antifungal treatment. She recovered after an approximately one-month hospitalization and was discharged.

A 56-year-old woman presented with gastric outlet obstruction. She underwent four consecutive outpatient upper endoscopies at a frequency of approximately once per month. The EGDs showed an ulcer at the pre-pyloric area and a pyloric stricture, which was dilated each time. Random biopsies of the stomach during the first EGD showed chronic active gastritis, and H. pylori was negative by immunostaining. She started proton pump inhibitor (omeprazole 40 mg). Biopsies of the antrum taken during her second EGD showed chronic active gastritis. Sarcina and rare H. pylori microorganisms were identified on routine H&E stain (Figure 2a and Figure 2b). Similar to Case 1, Sarcina species were noted in the gastric lumen admixed with vegetable matter consistent with delayed gastric emptying. By the third EGD, the ulcer had healed after the treatment. By the fourth EGD, the patient was eating better without nausea or weight loss, and there was no further follow-up.

Sarcina is a gram-positive, anaerobic, acid-tolerant coccus. It is associated with GI surgery and exhibits a 2:1 female-to-male ratio.[1] The patients in these cases were both female; the first had a history of GI surgery, and the second had a pyloric stricture.

The pathogenic role of Sarcina in humans remains unclear and can be an incidental finding in gastric biopsies.[3, 10] In patients with delayed gastric emptying, retained carbohydrates and other nutrients provide a fermentative substrate for Sarcina overgrowth.

Our first case supports the idea that Sarcina contributes to the development of gastric ulcer perforation. The only other two reported cases of perforation were a 14-year-old male with a history of bowel reduction due to malrotation of the small intestine [8] and a 76-year- old male with acute abdominal pain who presented in the ER and died after surgery.[9] Our patient had a history of gastric surgery and an ulcer resistant to H. pylori therapy. The pre-existing ulcer and delayed gastric emptying might have provided a nidus for Sarcina overgrowth. Morphologic findings of Sarcina microorganisms in both the gastric lumen and the serosa are consistent with clinically, macroscopically, and microscopically confirmed perforated gastric ulcer. As Sarcina can cause deadly emphysematous bloating in animals, it is possible that their association with human GI pathology is not due to direct tissue invasion but rather fermentation byproducts produced by the organism in the carbohydrate-rich gastric lumen.

Our second case demonstrates a rare example of Sarcina co-occurring with H. pylori. Only Sauter and colleagues have previously shown co-existence of Sarcina withH. pylori in two siblings.[11] Both H. pylori and Sarcina can survive in an acidic environment, and H. pylori infection can cause delayed gastric emptying via smooth muscle relaxation from release of leukotrienes or nitric oxide.[12] Although H. pylori could, in theory, be a predisposing factor in Sarcina infection, their rare co- occurrence may be due to eradication of Sarcina by antiH. pylori treatment.

Currently, there is no consensus on treatment regimens for Sarcina.[13] Published regimens leading to successful outcomes include anti-ulcer therapy and adjunctive use of metronidazole with a second antibiotic (most commonly ciprofloxacin).

It is very helpful if clinicians provide clinical information about any history of delayed gastric emptying along with the tissue that been submitted for pathology. This clinical history will alert GI pathologists to rule out the presence of Sarcina which is usually located near the gastric mucosal surface and has a pathognomonic tetrad morphology. To increase awareness of Sarcina’s association with severe disease, pathologists may include the following statement in their reports: “Sarcina has been reported to be present in association with emphysematous gastritis and gastric perforation.”

the original work is properly cited and the use is non-commercial. See: licenses/by-nc/4.0/