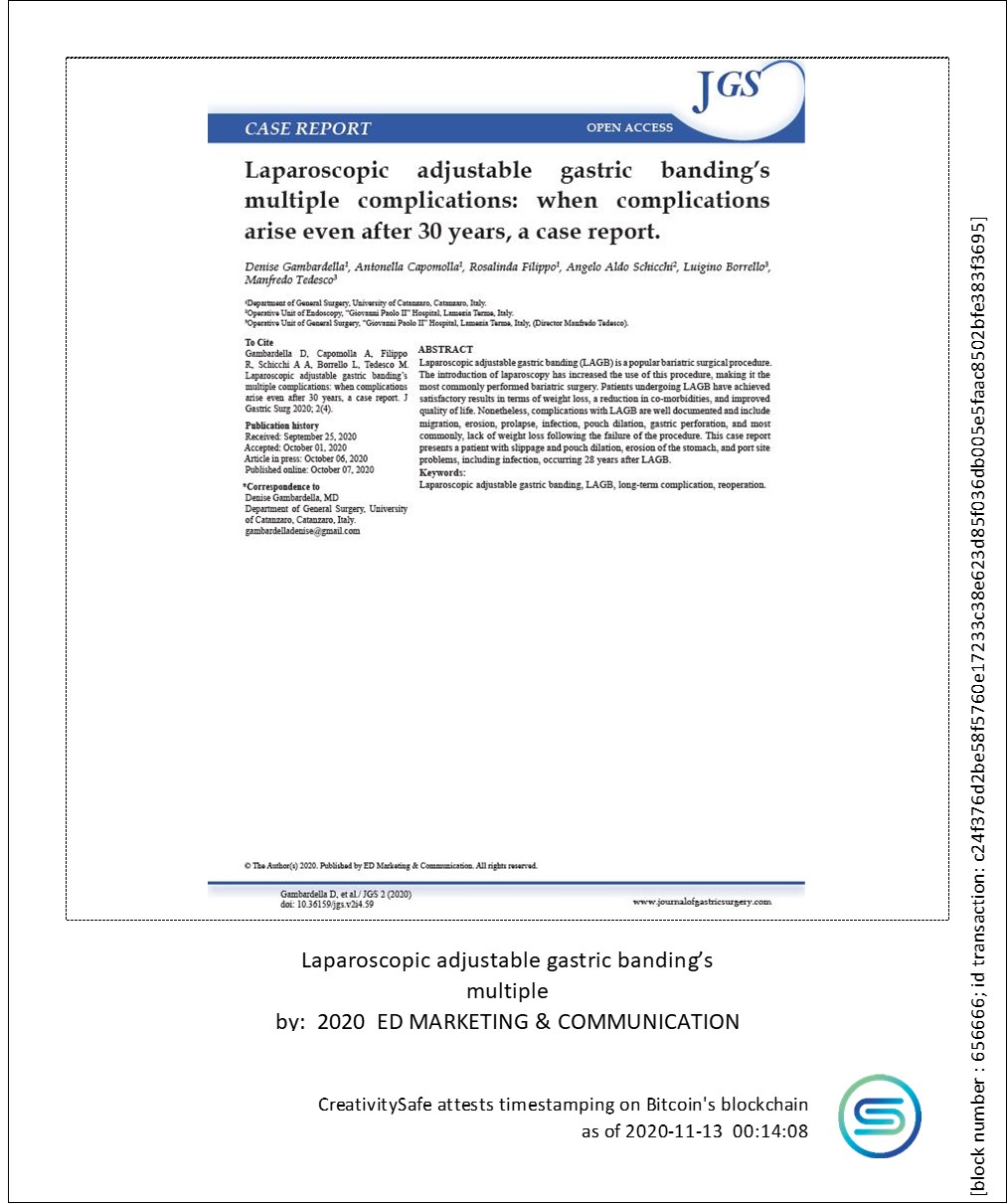 Laparoscopic adjustable gastric banding (LAGB) is a popular bariatric surgical procedure. The introduction of laparoscopy has increased the use of this procedure, making it the most commonly performed bariatric surgery. Patients undergoing LAGB have achieved satisfactory results in terms of weight loss, a reduction in co-morbidities, and improved quality of life. Nonetheless, complications with LAGB are well documented and include migration, erosion, prolapse, infection, pouch dilation, gastric perforation, and most commonly, lack of weight loss following the failure of the procedure. This case report presents a patient with slippage and pouch dilation, erosion of the stomach, and port site problems, including infection, occurring 28 years after LAGB.

Currently, obese patients are being offered an increasing number of treatment options, including bariatric surgery, a popular and viable therapeutic choice. Among the most frequently performed bariatric procedures, laparoscopic adjustable gastric banding (LAGB) has the lowest morbidity and mortality rates, despite being burdened with complications such as band slippage and erosion that often require revisionary surgery.[1] In this report, we describe the complex case of a 73-year-old female patient with a body mass index (BMI) of 41.6 kg/m2 who underwent LAGB in September 1992 and came to our attention 28 years later, presenting with fever, epigastric pain, and multiple LAGB-related complications, which necessitated laparoscopic removal.

A 73-year-old Caucasian female presented to the emergency department feeling generally unwell and reporting fever and abdominal pain over the past 14 days. She had a history of pain, nausea, and vomiting. Her medical history was significant for severe obesity, with a BMI of 41.6 kg/m2, diabetes, hypertension, and LAGB 28 years prior. Upon examination, the patient had abdominal pain, especially in the epigastric region, and pain and redness from the LAGB port. Her laboratory results showed leukocytosis (16,000/mm3) and a C reactive protein level of 157 mg/L. A direct abdominal X-ray and routine gastrografin upper gastrointestinal series showed a slippage of the band. To rule out suspicion of erosion of the gastric wall, we carried out an abdominal CT scan, which came back positive for leakage, free air, and inflammation around the port. A laparoscopy was performed, and multiple adhesions, with evidence of inflammation, were seen in the upper abdomen, around the band, and between the stomach and the liver.

Initially, there was no visualization of the band; however, with blunt and gentle maneuvers, using the harmonic ace, we isolated the band and cut it off with scissors (Figure 1).

Figure 1: surgical steps for bandage removal: lysis of the adhesions between the stomach, liver, and abdominal wall.

During the maneuvers to remove the bandage, the presence of stomach erosion on the anterior wall was highlighted, and the breach was approached with forceps and sutured with a 45 mm endostapler using a load for thick tissues (Figure 2).

Figure 2: dissection around the gastric lesion and removal of the eroded tissue using a mechanical stapler.

A peri-gastric drain was placed and a nasogastric tube was left in place postoperatively. The operation lasted 50 minutes. There was no blood loss and no intra- or postoperative complications.

LAGB is a restrictive operation frequently performed on obese patients, together with laparoscopic sleeve gastrectomy.[1,2] For prolonged weight loss, bariatric surgery is currently the only effective treatment for obesity beyond lifestyle change and various drug treatments.[3] The first adjustable gastric band was implanted by Kuzmak in the 1980s using laparotomy. With the advent of laparoscopic surgery, providing a minimally invasive approach, LABG became an effective option to treat obesity.[4,5] The introduction of laparoscopy has increased the international popularity of LAGB, making it the most common bariatric surgery in the world.[6] Several studies have indicated how quickly patients lose weight over the years.[7-11] Most international studies have shown that weight loss occurs within two years of the procedure, with a peak in weight loss at 3–4 years.[7,12,13].

Patients undergoing LAGB have achieved excellent results in terms of quality of life, weight loss, and reduction in comorbid conditions.[14] Nonetheless, complications of LAGB are well documented in the literature.[10,12,15-17] Complications following gastric banding can be divided into band-related and port related issues. If present, these complications can lead to the general failure of the procedure and make the patient susceptible to major infectious complications. Considering the long-term complication rate of 40% [18,19], in case of doubt regarding the onset of these complications, diagnostic investigations must be carried out. In the case examined, the patient had a double problem: a band-related complication that had also caused a gastric lesion, and a port-related one for the pocket infection. The most common LAGB-related complications include pouch dilation (or enlargement) and band slippage, reported in 1–21% of LAGB patients. [20] In comparison, gastric prolapse, gastric obstruction, esophageal dilation, band erosion, gastric necrosis, and port problems represent less common complications. [14,20] Other complications described include cholelithiasis/cholecystitis, ventral hernia, dehydration, hemorrhage, pancreatitis, leak, and injury during the operation (liver hematoma/spleen injury).[10] Gastric necrosis is an extremely rare but potentially fatal complication of LAGB, typically developing because of prolapse, pouch dilation, or obstruction.[18] Overall, a complication incidence of 1.2% and a late reoperation rate of 12.5% have been reported.[11]

We presented a difficult case involving multiple complications related to LAGB, which necessitated laparoscopic removal. The complications were bandrelated and port-related: band slippage, gastric lesion, pocket infection, and trocar site hernia as well as the failure of the procedure in terms of a lack of weight loss. She was investigated for possible sources of sepsis. In conclusion, we advocate the need for careful follow-up for all patients with a history of LAGB who present with abdominal complaints, even though the band is correctly positioned. Whenever LAGB-related complications are suspected, patients should be monitored closely. If the symptoms persist or the pouch remains dilated, a prompt diagnostic operation should be performed to avoid more severe complications, such as gastric necrosis. To avoid complications related to LAGB, at the first abdominal symptoms, we suggest direct abdominal X-ray and a routine gastrografin upper gastrointestinal series for earlier identification and intervention in order to minimize morbidity and mortality in patients who develop a leak.[21] In case of suspicion of erosion of the gastric wall or suffering, perform an abdominal CT scan, searching for alteration of wall enhancement and intramural air density along the gastric wall or gastric pneumatosis. A plain radiograph can reveal if the band is oriented correctly or a gastric distention is evident. The success of the intervention and the avoidance of potentially serious complications also depend on the follow-up that this type of patient must undergo, which must be pursued even after many years, as in this case, the patient immediately stopped undergoing the band monitoring, leading to potentially fatal complications almost 30 years later.