The effect of ERAS management in gastric cancer: assessment from the IMIGASTRIC study 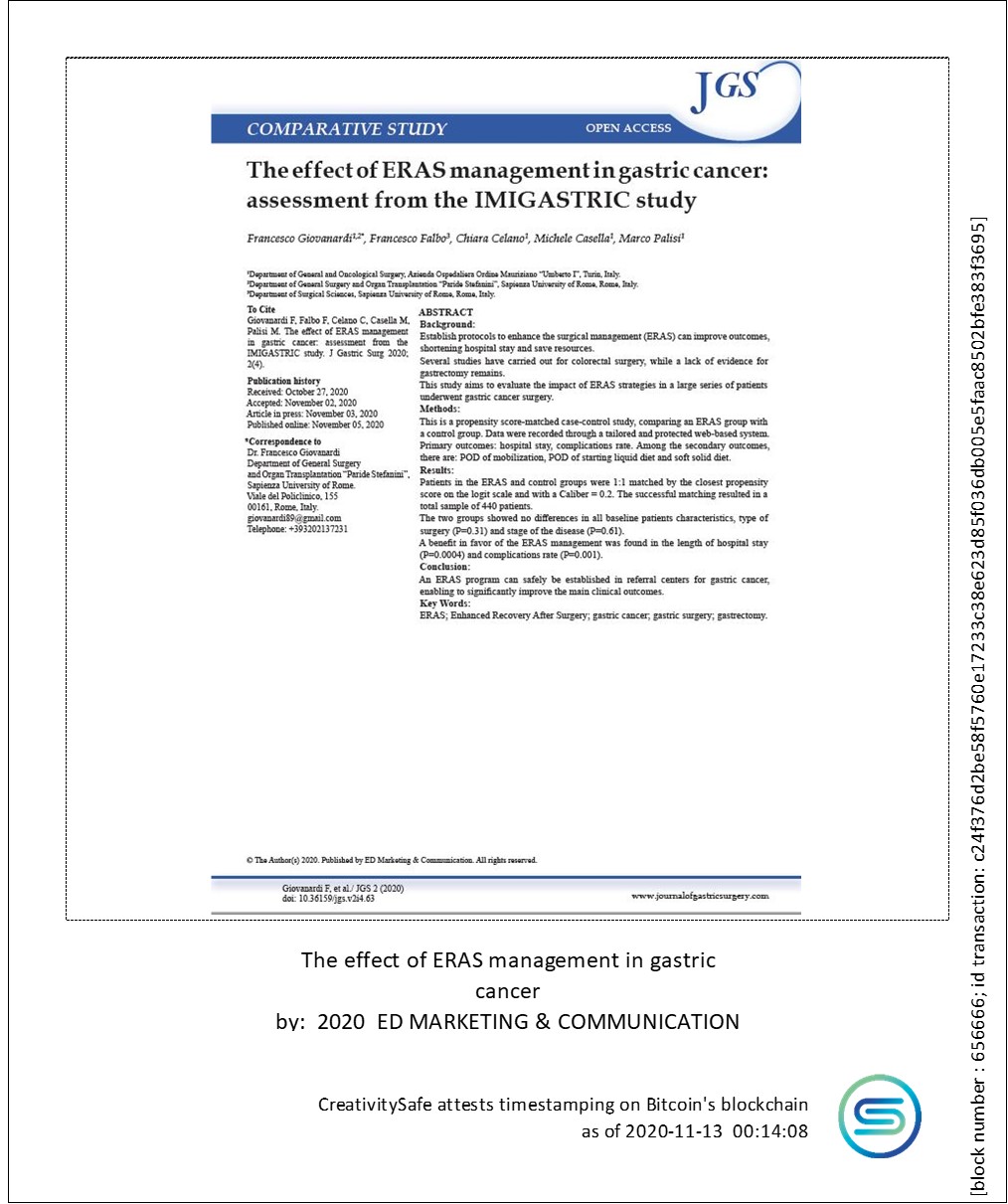 The effect of ERAS management in gastric cancer: assessment from the IMIGASTRIC study

Background:
Establish protocols to enhance the surgical management (ERAS) can improve outcomes, shortening hospital stay and save resources. Several studies have carried out for colorectal surgery, while a lack of evidence for gastrectomy remains.This study aims to evaluate the impact of ERAS strategies in a large series of patients underwent gastric cancer surgery.
Methods:
This is a propensity score-matched case-control study, comparing an ERAS group with a control group. Data were recorded through a tailored and protected web-based system. Primary outcomes: hospital stay, complications rate. Among the secondary outcomes, there are: POD of mobilization, POD of starting liquid diet and soft solid diet.
Results:
Patients in the ERAS and control groups were 1:1 matched by the closest propensity score on the logit scale and with a Caliber = 0.2. The successful matching resulted in a total sample of 440 patients. The two groups showed no differences in all baseline patients characteristics, type of surgery (P=0.31) and stage of the disease (P=0.61). A benefit in favor of the ERAS management was found in the length of hospital stay (P=0.0004) and complications rate (P=0.001).
Conclusion:
An ERAS program can safely be established in referral centers for gastric cancer, enabling to significantly improve the main clinical outcomes.

Gastric cancer is the second leading cause of cancer death in the world and surgery plays the most important role in the treatment of this disease. However, surgery for gastric cancer remains a highrisk procedure with clinically significant postoperative stress, complications, and significant sequelae. Significant advances in the management of surgical patients have been in last decades for gastric cancer. This has led to the concept of enhanced recovery after surgery (ERAS) with the objective of reducing the length of hospital stay accelerating postoperative recovery and reducing surgical stress. The ERAS protocols have many items, including the preoperative patient education, preoperative carbohydrate loading, early mobilization and feeding starting from the first postoperative days. Most of studies on this field were published for colorectal surgery, while only few authors described ERAS protocols in gastric cancer surgery. In the present study, we have evaluated the effects on postoperative functional recovery outcomes after gastrectomy in patients undergoing an ERAS program in comparison with a conventional surgical management.

Data were collected in the context of the IMIGASTRIC study and after sharing a specific study protocol. [1] The study was registered at clinical trials.gov with a registration number of NCT02325453.

Data entered into the IMIGASTRIC registry regarding procedures performed until data extraction (November 2019) were analyzed. All involved centers are referral institutions with a well-established gastric cancer program. All diagnostic and surgical interventions at these centers were done according to international guidelines and information stored in institutional prospective data collection systems.

Data gathered were obtained from existing records, diagnostic tests, and surgical intervention descriptions. Data were collected and recorded by all institutions through a specific online shared protected system (https://imigastric.logix-software.it/). The present study was reported in accordance with the STROBE guidelines and statement[6].

Propensity score matching analysis was carried out using SPSS software version 23 and R software version 3.1, through the Custom Dialog “PS Matching”. Each patient’s propensity score was calculated by a multivariable logistic regression model using the covariates of institution, age, sex, comorbidities, body mass index (BMI), surgical approach (open, laparoscopic, robotic) type of gastrectomy, stage of disease. Patients in the ERAS and Control group were 1:1 matched by the closest propensity score on the logit scale and with a Caliper = 0.2

IBM SPSS Statistics V.23 was used to carry out the statistical analysis. An intention to treat analysis was performed. The dichotomous variables were expressed as numbers and percentages, while continuous variables as mean and SD, or median and IQR (minimum and maximum values). Continuous variables were compared using independent T test. Pearson’s χ2 test or Fisher’s exact test, as appropriate, was used for analysis of categorical data. A P value of < 0.05 was considered statistically significant.

At the time of this analysis, 1445 patients entered in the IMIGASTRIC registry had information on the ERAS management. The matching analysis resulted in a total sample of 440 patients, 220 from the ERAS group and 220 from the Control group. The successful matching permitted to obtain a homogeneous distribution of all patient’s characteristics (Table 2). Table 3 shows no significant differences between groups in surgical approach (P=0.14), type of gastrectomy (P=0.31), stage of the disease (P=0.61). A significantly shorter hospital stay (P=0.0004; Figure 1) was found in the ERAS group versus the Control group (Table 4). The most relevant benefit was shown in the resumption of a liquid (P=0.01; Figure 2) and a soft solid diet (P=0.007; Figure 3). No significant differences in patient mobilization (P=0.56) and first flatus (P=0.07) were found. The ERAS group showed some advantages in the intravenous analgesic use (P<0.0001; Figure 4) than the control group, but no differences were found in the length of antibiotic use (P=0.31). In this study the adoption of an ERAS protocol resulted in a significant reduction in post-operative complications (P=0.001) than the Control group.

Figure 1: mean difference between groups in the length of hospital stay.

Figure 2: mean difference between groups in starting a liquid intake.

Figure 4: mean difference between groups in the length of intravenous analgesic use.

The present study evaluated the role of the ERAS program in the management of gastric cancer patients using a propensity score case matched analysis to perform a comparison with a conventional care treatment. A significant decrease in the length of hospital stay and in-hospital postoperative complications were the most relevant findings. Important items in the ERAS protocol are early mobilization and feeding[7], which is especially facilitated by the absence of the NG tube and drainage, as well as an early removal of the urinary catheter. Smart[8] showed that failure of early patient mobilization is associated with prolonged hospital stay. Yamada[9] in his study showed that the recovery of bowel function was significantly earlier in the ERAS group than in the conventional group. In addition, Wang[10] reported that the first day of flatulence after gastric surgery was a mean of one day earlier in patients who received fast-track surgery compared to those who received conventional care. Some factors such as prolonged fasting and placement of the nasogastric tube appear to cause nausea and contribute to a delay of intestinal recovery[11]. In our study, there was not a significant difference regarding the first flatus. However, we believe that this outcome is subject to a high risk of bias. Instead, variables regarding the oral recovery of food intake can be considered more reliable. We found a significant advantage in favor of the ERAS group in all steps of food intake, from starting a liquid diet (3.89±2.7 vs 4.76±4.41; P<0.01) to the resumption of a solid diet (6.79±4.91 vs 9.05±10.87; P=0.007). The ERAS protocols require the patient be not subjected to long periods of fasting. Early postoperative nutrition reduces postoperative catabolism, accelerates the return of bowel function, and decreases the risk of complications. This was especially studied in colorectal surgery[12, 13]. Moreover, Lewis et al.[14] confirmed in their metaanalysis that keeping patients in a fasting state is not beneficial. Several studies have shown that early oral feeding is feasible and brings benefits in gastric surgery[10, 15]; however, this point remains controversial. Even if an early postoperative oral feeding has been shown to speed up the recovery after various types of surgery, this approach after gastrectomy has always been seen with suspicion because of some concerns, not actually well demonstrated in the literature, that early food intake may cause anastomotic leakage or intestinal obstruction. In recent years, several studies have confirmed that early oral food intake after gastric surgery is safe and might be associated with enhanced recovery and shorter hospital stay[9, 16]. Particularly, a randomized controlled study has reported data on the safety of early oral feeding starting in the second postoperative day (POD 2) after gastrectomy[17]. The Makuuchi[18] and Pedziwiatr[19] studies, comparing ERAS and conventional management after gastrectomy, have confirmed that oral feeding in POD 2 is safe and allows the reduction of post-operative administration of intravenous fluids and an early discharge[20]. Sugisawa[21] focused on the rate of anastomotic leakage and aspiration pneumonia to evaluate the real risks of early nutrition. In his study, the incidence of anastomotic leakage was 0.8%, a figure he highlighted as not only lower than that of the subjects in his historical cohort (1.7%), but also a result not different or lower (0.8-1.9%) when compared to previous data in studies in which conventional perioperative care was reported. Therefore, the author concluded that early oral nutrition is not able to adversely affect the anastomotic site. The same results were obtained by Yamada[9, 22], showing a similar incidence in anastomotic leaks (1.1%). In our study, the adoption of an ERAS program resulted in a significant reduction in hospital stay with a mean difference of 3.42 days compared to conventional management. Similar results were obtained by Sugisawa[21] and Wang[10]. In our study, a significant reduction in patients with postoperative complications (8.2% versus 19.5%; P=0.001) was shown in the ERAS group. Moreover, no differences in readmissions for complications after discharge were shown (P=0.5). In conclusion, the adoption of a management based on the ERAS principles for gastric cancer can safely improve the patient’s functional recovery, allowing an early discharge and a reduction of overall complications.

FG, FF, CC, MC, MP conceptualized and designed the study, acquired, and analyzed data, interpreted the study results, drafted the manuscript, and critically revised the final version of the manuscript.

This study received financial support for data extraction and analysis in the context of the Research Startup Projects (2019) granted by “La Sapienza” University of Rome.

This study is conducted in compliance with ethical principles originating from the Helsinki Declaration, within the guidelines of Good Clinical Practice and relevant laws/regulations. Trial registration number: NCT02325453.

This is an Open Access article distributed in accordance with the Creative Commons Attribution NonCommercial (CC BY-NC 4.0) license, which permits others to distribute, remix, adapt, build upon this work noncommercially, and license their derivative works on different terms, provided the original work is properly cited and the use is non-commercial. See: http://creativecommons.org/ licenses/by-nc/4.0/