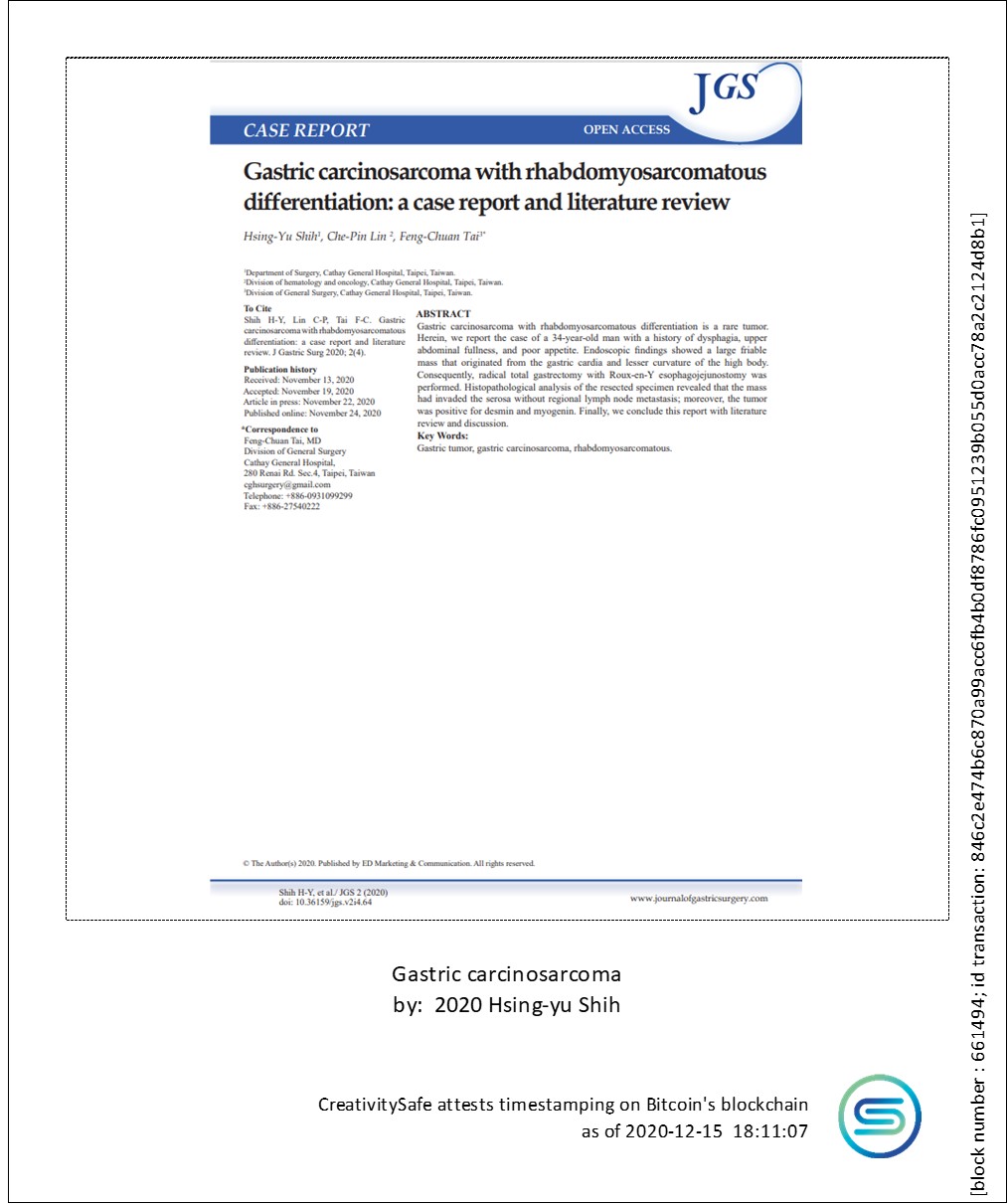 Gastric carcinosarcoma with rhabdomyosarcomatous differentiation is a rare tumor. Herein, we report the case of a 34-year-old man with a history of dysphagia, upper abdominal fullness, and poor appetite. Endoscopic findings showed a large friable mass that originated from the gastric cardia and lesser curvature of the high body. Consequently, radical total gastrectomy with Roux-en-Y esophagojejunostomy was performed. Histopathological analysis of the resected specimen revealed that the mass had invaded the serosa without regional lymph node metastasis; moreover, the tumor was positive for desmin and myogenin. Finally, we conclude this report with literature review and discussion.

differentiation: a case report and literature

Carcinosarcoma is an uncommon biphasic malignant tumor composed of carcinoma and sarcoma components. In the upper gastrointestinal tract, carcinosarcoma is more frequently found in the esophagus; however, its gastric localization has been reported rarely.[1- 3] The presentation of gastric carcinosarcoma with rhabdomyosarcomatous differentiation is even rarer, with only 12 cases reported thus far.[4-15]

Herein, we report the case of a male patient who developed gastric carcinosarcoma with rhabdomyosarcomatous differentiation and provide the clinical and histopathological features of this tumor. Moreover, we also review and discuss relevant literature.

A 34-year-old man had been experiencing dysphagia along with upper abdomen fullness and poor appetite for 2 months; he had lost 12 kg of body weight over the previous 6 weeks. Initially, he went visited a local clinic, where panendoscopy was performed; the results revealed a large (size, 4 cm) friable tumor, stretching from the cardia to the lesser curvature side of the high body (Figure 1). The tumor arose from the submucosal layer with infiltration to the mucosal layer. A biopsy sample was obtained and sent for pathological examination. The histopathological analysis confirmed the presence of malignancy with rhabdomyosarcomatous differentiation.

Figure 1: Panendoscopy revealed a tumor stretching from the cardia to the lesser curvature side of the high body.

The patient was referred to Cathay General Hospital for further evaluation. The levels of tumor markers CEA, CA19-9, and SCC were all within the normal range. Abdominal computed tomography (CT) revealed an irregular lobular mass, measuring approximately 7.5 × 6.5 × 8.5 cm3, stretching from the esophagogastric junction (EGJ) to the lesser curvature of the gastric high body, with at least three enlarged regional lymph nodes around the EGJ and lesser curvature of the stomach (Figure 2A, 2B). Nevertheless, chest CT revealed absence of pulmonary metastasis.

Figure 2A: Irregular lobular mass lesion stretching from the EGJ to the lesser curvature of the gastric high body.

Figure 3: Polypoid tumor with central ulceration at the cardiac region

Macroscopic examination of the excised tissue revealed an 11.2 × 8.9 cm2 tumor mass, invading up until the serosa (Figure 4), but no lymph node metastasis was found. Histopathological examination revealed complex glandular formation with marked nuclear atypia and small, loose clusters of atypical cells, with indistinct to little eosinophilic cytoplasm and marked pleomorphic and hyperchromatic nuclei (Figure 5). Moreover, immunohistochemical analysis showed that the loose, atypical cells were positive for CK(AE1/3), myogenin, and desmin but negative for S-100, CD117, CD34, and CD45RB. Taken together, these results confirmed the diagnosis of gastric carcinosarcoma with rhabdomyosarcomatous differentiation, at a pathological stage of T4aN0M0 (Stage IIB).

Finally, owing to favorable recovery, the patient was discharged on the 14th postoperative day. At the 16-month follow-up, the patient did not show any evidence of recurrence.

Figure 4: Tan-white and firm tumor invading from the mu - cosa to the serosa

Based on the conventional histological findings, the World Health Organization defines carcinosarcoma as a malignant tumor composed of intimately mixed epithelial and mesenchymal elements of a type ordinarily found in malignancies of adults.[16] Carcinosarcoma can have a wide variety of localization sites, with the uterus being the most common site. However, as mentioned, localization in the stomach is rare. Table 1 presents various features of gastric carcinosarcoma with rhabdomyosarcomatous differentiation included in all 12 relevant cases reported thus far.

[5-15] In all 12 cases, no clinical feature was associated with age, sex, or location. However, polypoid lesions were the most commonly reported.[17] The tendency of gastric rhabdomyosarcoma to metastasize to the lymph node and lungs is consistent with the observations of rhabdomyosarcoma originating from other sites.

The current gold standard technique for definitive diagnosis is based on immunohistochemical staining of endoscopic biopsy or on surgical findings. Radical gastrectomy is the treatment of choice when feasible, even when the tumor shows rapid growth and malignant potential. The therapeutic effects of chemotherapy or radiotherapy have not been reported thus far. Moreover, given that this condition is rare and is diagnosed at advanced stage in most cases, no applicable standard chemotherapy regimen is available yet.

HYS, CPL, FCT conceptualized and designed the study, acquired, and analyzed data, interpreted the study results, drafted the manuscript, and critically revised the final version of the manuscript.

This is an Open Access article distributed in accordance with the Creative Commons Attribution Non-Commercial (CC BY-NC 4.0) license, which permits others to distribute, remix, adapt, build upon this work noncommercially, and license their derivative works on different terms, provided the original work is properly cited and the use is noncommercial. See: http://creativecommons.org/licenses/ by-nc/4.0/