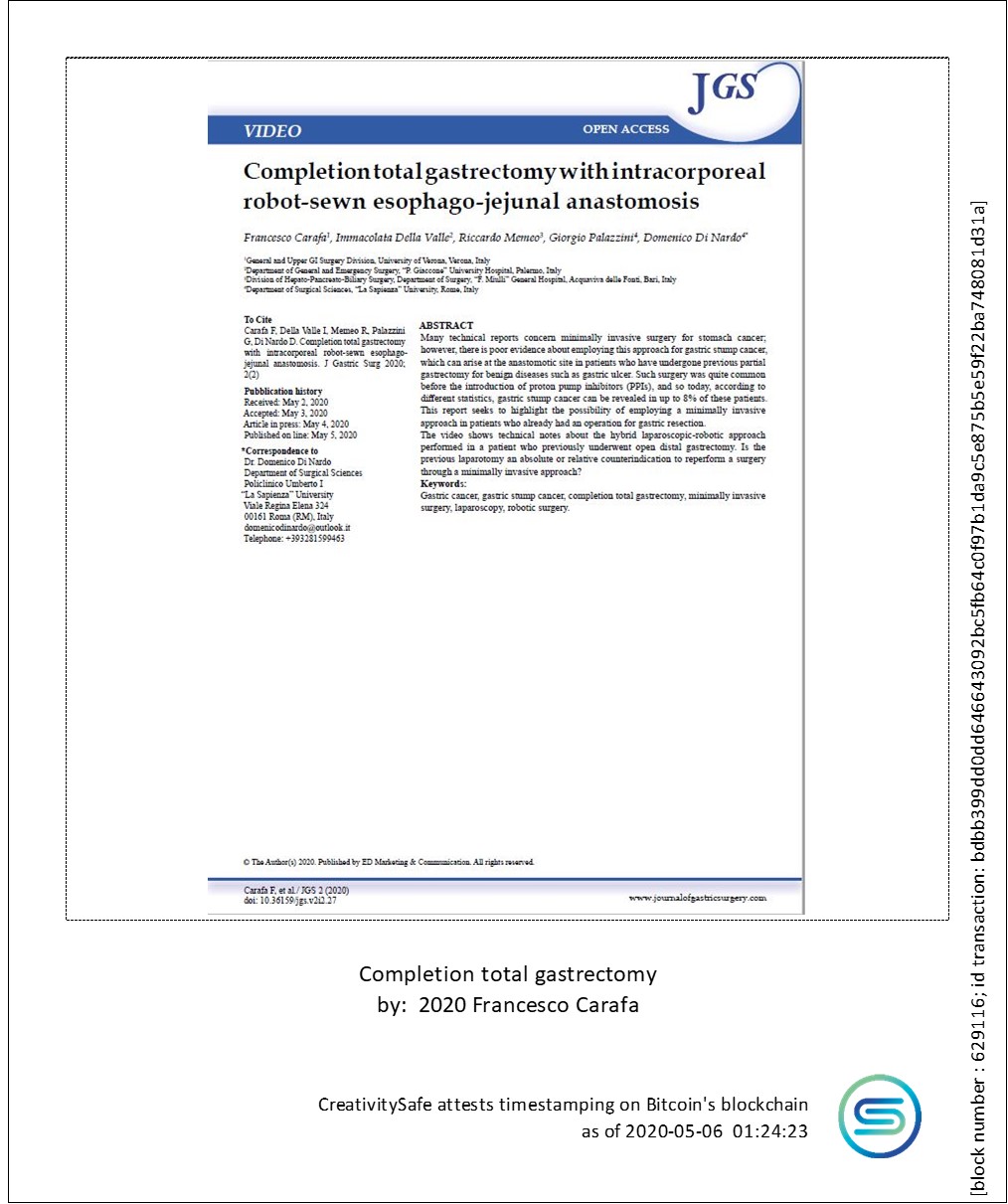 In the past, the number of gastric resections, especially for benign pathologies such as gastric ulcers, was higher, so today, we can observe a certain number of gastric carcinoma arising at the anastomotic site, that is, gastric stump cancer[1, 2].

The case reported in this article demonstrates the use of minimally invasive technology to remove a remnant stomach that is tenaciously embedded by adhesions and how to perform the reconstruction of the digestive tract.

The patient underwent a clinical examination, blood tests, and an abdominal CT scan. The latter revealed a mass corresponding to gastro-jejunal anastomosis without evidence of a secondary disease. Therefore, the patient underwent an upper endoscopy examination that confirmed an ulcerative tumor at the level of the gastro-jejunal anastomosis on the side of the afferent loop, whose biopsies indicated the presence of a tubular adenocarcinoma.

After an anesthesiological examination to rank the operative risk, the patient was scheduled for a completion total gastrectomy via a minimally invasive approach.

Technical note Given the previous laparotomy, the pneumoperitoneum was performed through an open access to avoid possible injuries due to expected adhesions. Then, one laparoscopic trocar for the camera (10-12 mm) was placed in the supra-umbilical position, two laparoscopic trocars (10-12 mm) were positioned along the left and right paramedian line, and two 8-mm robotic trocars were positioned in the right and left flank.

First, an exploratory laparoscopy was performed. Multiple tightperitoneal adhesionswere found involving the gastro-jejunal anastomosis, the omentum and the liver, and among the intestinal loops.

The adhesions were completely removed using the harmonic ace to gain access to the right para-anastomotic area until the right diaphragmatic pillar.

The dissection continued between the gastro-jejunal anastomosis and the anterior surface of the pancreas. The biliary (afferent) and alimentary (efferent) sides of the intestinal loop were identified and mobilized.

The two intestinal tracts were sectioned through a mechanical stapler about 3 cm downstream from the anastomosis site.

Further adhesions between the gastric wall and the pancreatic capsule were removed to gain access to the left gastric artery, which is sectioned between Hem-o- Lock at its origin from the celiac trunk.

Once the proximal portion of the stomach was fully mobilized, the esophagus was fixed at the diaphragmatic pillars with two stiches and then sectioned with the linear stapler.

At this point, a mini-laparotomy was performed at the level of the previous scar for specimen extraction and for the preparation of the Roux-en-Y reconstructive step. An extracorporeal jejuno-jejunal anastomosis was performed using the mechanical stapler followed by a hand-sewn suturing of the enterotomy (the first layer in continuous suturing in PDS 3/0 and a second layer with interrupted stiches in Vicryl 2/0).

The intestinal tract was then repositioned in the abdominal cavity, and the mini laparotomy was closed. The Da Vinci Xi robotic system was now docked to make the esophago-jejunal anastomosis.

A first posterior layer with separated stiches in Vicryl 2/0 was done to connect the serosa of the jejunum to the muscolaris of the esophagus. Then, the esophagus end margin was opened, as was the corresponding side of the lateral wall of the jejunum, and a double continuous suturing was performed using 3/0 PDS starting from the posterior side and then closing on the anterior side. The anastomosis was completed with the second anterior layer, which was performed with separated stiches in Vicryl 2/0.

Two abdominal drainages were placed close to the esophago-jejunal and the jejuno-jejunal anastomosis.

Post-operative course A gastrografin swallow was performed on post- operative day (POD) 2 and showed no complications; thus, the patient starting taking sips of water per os. The day after, the patient started a liquid diet, and the drainages were removed. In POD 4, a soft solid diet was regularly taken, and the patient was discharged in POD 5.

The procedure described is technically demanding, and combining the laparoscopic and robotic approaches allows the surgeon to take advantage of their characteristics based on the surgical step[3, 4]. In fact, laparoscopy gives more spatiality in the lysis of adhesions, and the robotic system is unbeatable in intracorporeal suturing.

The video associated with this article can be found, in the on-line version, at:

Many technical reports concern minimally invasive surgery for stomach cancer; however, there is poor evidence about employing this approach for gastric stump cancer, which can arise at the anastomotic site in patients who have undergone previous partial gastrectomy for benign diseases such as gastric ulcer. Such surgery was quite common before the introduction of proton pump inhibitors (PPIs), and so today, according to different statistics, gastric stump cancer can be revealed in up to 8% of these patients. This report seeks to highlight the possibility of employing a minimally invasive approach in patients who already had an operation for gastric resection.

The video shows technical notes about the hybrid laparoscopic-robotic approach performed in a patient who previously underwent open distal gastrectomy. Is the previous laparotomy an absolute or relative counterindication to reperform a surgery through a minimally invasive approach?