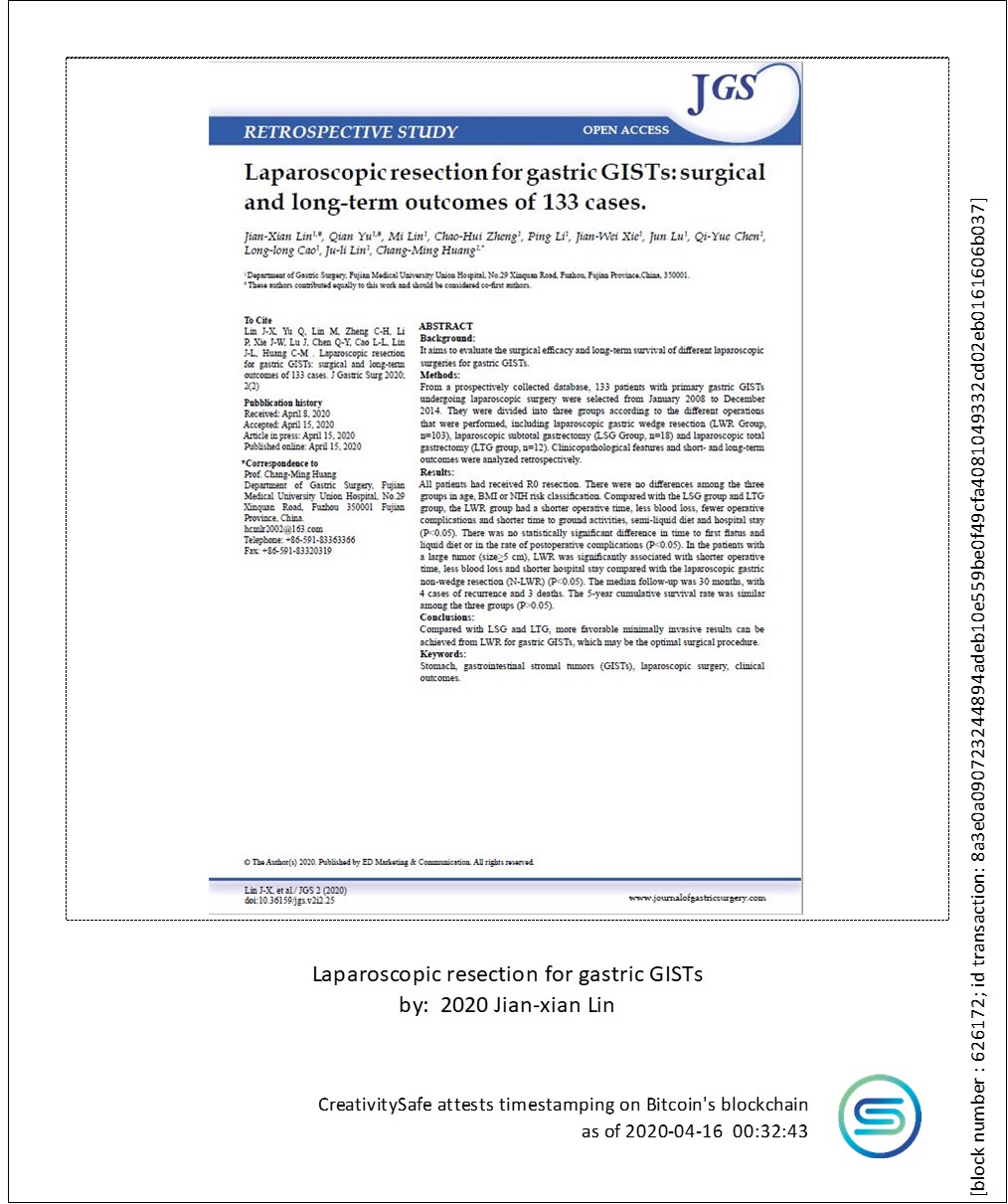 From January 2008 to December 2014, 324 patients with primary gastric GISTs were treated with radical resection at the Department of Gastric Surgery, Fujian Medical University Union Hospital. A retrospective analysis was performed, using a prospectively maintained comprehensive database, to determine the technical pitfalls of the procedure. In this series, we included only patients with gastric GISTs, as confirmed by pathological examination. We excluded patients who presented with a malignant tumor (n=106); patients who underwent open surgery (n=82); and patients who underwent endoscopic excision (n=3). Finally, 133 patients were eligible for inclusion in this study. Patients were classified into three groups according to the different operations: laparoscopic gastric wedge resection (LWR Group, n=103), laparoscopic subtotal gastrectomy (LSG Group, n=18) or laparoscopic total gastrectomy (LTG group, n=12) (Figure 1). All patients underwent abdominal CT, endoscopy or EUS to initially assess tumor size and location and to determine whether there was distant metastasis.

The patient was placed in the reverse Trendelenburg and supine position with his or her legs spread apart. After the induction of general anesthesia, pneumoperitoneum was established at a pressure of 12 to 15 mm Hg. A 10-mm trocar for 30°telescope was inserted below the umbilicus. A 12-mm port was inserted percutaneously in the left upper quadrant as the dominant hand port. A 5-mm trocar was placed in the contralateral side. Another two 5-mm trocars were placed in the left and right lower quadrants, respectively. The surgeon stood

to the left side of the patient, with the first assistant on

the patient’s right side and the laparoscopist between

the patient’s legs. Occasionally, gastroscopy was used to assist with identifying the tumor. The tumor specimen was extracted using a bag via a 6-10 cm epigastric incision. The stomach and peritoneal cavity were inspected to rule out invasion of adjacent organs and peritoneal seeding.

The LSG group had a higher proportion of male patients; the tumors of the LWR group were mostly located in the fundus and body of the stomach, and the mitotic count was lower. There was no significant difference among the three groups in age, Body Mass Index (BMI), NIH

There was no tumor rupture, and all patients successfully completed R0 resection. There was one conversion to open surgery in the LWR group due to severe adhesion with surrounding tissue. Compared with the LSG group and LTG group, the LWR group had a shorter operative time, less blood loss and fewer operative complications. The overall operative complication rate was 1.5%, with one patient in the LTG group having an injured spleen and one patient in the LSG group having an injured left gastric artery.

among the three groups; the rates of the LSG, LTG and LWR groups were 11.0%, 8.3%, 5.8%, respectively. The overall severe postoperative complication (≥IIIa) rate was 3.0%. One patient in the LTG group had an occurrence of an adhesive intestinal obstruction and underwent open enterolysis, and one patient in the LWR group had occurrence of bleeding that required re-exploration; both patients were discharged after recovery. Two patients developed an anastomotic stricture after LTG and LWR; both received endoscopic anastomotic dilation after one month (Table 2).

underwent laparoscopic gastric non-wedge resection (N-LWR, including LTG and LSG). These patients were

One hundred thirty patients (97.7%) were followed up; the median follow-up duration for the entire cohort was 30.0 months (range, 4–78 months), with 4 cases of recurrence and 3 deaths. The 5-year cumulative survival

rates of the LSG, LTG, and LWR groups were 80%, 100%, and 94.5%, respectively, which was similar among the three groups (P>0.05)( Figure 3). Table 5 shows the clinicopathologic characteristics for cases of recurrence and death after resection.

Most GISTs are in a submucosal location and usually grow exogenously instead of diffusely infiltrating. It is generally accepted that the surgical goal should be a complete resection with negative margins. Meanwhile, extensive lymphadenectomy is not recommended because lymph node involvement is rare[10-12]. These unique growth patterns make GIST resection relatively simple and provide favorable conditions for minimally invasive surgery. A number of studies have shown the safety and feasibility of laparoscopic resection of gastric GISTs. Koh[13] et al. performed a systematic review and meta-analysis to compare the outcomes of laparoscopic gastric resection (LR) versus open gastric resection (OR) for gastric GIST. Although there was no difference in operative time, LR results in less blood loss, lower risk

There are a variety of ways for conducting a laparoscopic

resection of gastric GIST, and we should determine the appropriate surgical procedures based on tumor location, tumor size and growth pattern [15-17]. The main methods of pure laparoscopic surgery contain LWR, LSG (including LPSG and LDSG) and LTG. When the tumor is located in cardia and is large enough to be involved, local resection has a high incidence of causing gastrointestinal tract stenosis. Therefore, LTG or LPSG is preferred. Meanwhile, LWR is suitable for tumors that are small or that grow exogenously with pedicle, where the digestive tract remains unobstructed. Because fundus and greater curvature are spacious, GISTs located in these areas are often removed by LWR, whereas small tumors of lesser curvature require sufficient isolation of the surrounding tissues. Large GISTs with an endogenous growth model are difficult to operate, and stenosis is a frequent outcome. In such a case, LTG or LPSG will be a safer option. For the antral GISTs, LDSG is recommended. In this study, we demonstrated that LWR had less invasiveness, faster recovery and similar long-term prognosis when compared with LTG and LSG, making it an optimal surgical approach for gastric GIST treatment.

open surgery, which is in agreement with our previous studies [23]. In this study, 55 cases of GIST larger than

5 cm were successfully completed with laparoscopic resection except for 1 case that was converted to open due to severe adhesion to the surrounding tissue. There was no intraoperative rupture, and all cases had received R0 resection. For gastric GIST larger than 5 cm, LWR was associated with shorter operation time, less blood loss and shorter hospital stay than N-LWR was. Hence, we believe laparoscopic resection of gastric GIST with

tumor diameter ≥5 cm is still feasible and safe. LWR can be a preferred surgical approach for those GISTs if conditions allow.

Laparoscopic treatment of gastric GISTs is safe and feasible with satisfactory clinical efficacy. Compared with LSG and LTG, more favorable minimally invasive results can be achieved from LWR for gastric GISTs, which may be the optimal surgical procedure.

The work was supported by the National Key Clinical Specialty Discipline Construction program of China (No. [2012]649)and Key Projects of Science and Technology Plan of Fujian Province (No. 2014Y0025). The funders had no role in study design, data collection and analysis, decision to publish, or preparation of the manuscript.

All authors declare that they have no competing interests.

Ethics Committee of Fujian Medical University Union Hospital approved this retrospective study (Approval number: 20070428). Written consent was given by the patients for their information to be stored in the hospital database and used for research. All study participants, or their legal guardian, provided informed written consent prior to study enrollment.

It aims to evaluate the surgical efficacy and long-term survival of different laparoscopic surgeries for gastric GISTs.

All patients had received R0 resection. There were no differences among the three groups in age, BMI or NIH risk classification. Compared with the LSG group and LTG group, the LWR group had a shorter operative time, less blood loss, fewer operative complications and shorter time to ground activities, semi-liquid diet and hospital stay (P<0.05). There was no statistically significant difference in time to first flatus and liquid diet or in the rate of postoperative complications (P<0.05). In the patients with a large tumor (size≥5 cm), LWR was significantly associated with shorter operative time, less blood loss and shorter hospital stay compared with the laparoscopic gastric non-wedge resection (N-LWR) (P<0.05). The median follow-up was 30 months, with 4 cases of recurrence and 3 deaths. The 5-year cumulative survival rate was similar among the three groups (P>0.05).

Compared with LSG and LTG, more favorable minimally invasive results can be achieved from LWR for gastric GISTs, which may be the optimal surgical procedure.